Traffic code amends – ride safely and in accordance with the new law!

Every cyclist´s duty is to learn traffic rules. Safe traffic is a result of everybody following mutual rules and expressing their intentions clearly.

According to law, cyclists must adjust their speed to current conditions, and to be careful and cautious. Always maintain a speed, which allows you to anticipate all situations you can possibly face.

Do not cycle intoxicated!

Familiarize yourself with the rules

Cyclists´ place on the road

Fixed penalty, and maximum dimensions of a bicycle

Cyclists´ place on the road

Bicycle is a vehicle, and you must ride primarily on carriageways, or on separated cycleways. You can also ride on living streets, pedestrian zones, and cycle streets.

NEW: On one-way streets riding may be allowed to both directions

On living streets and pedestrian zones

Do not cycle here

Back to top (LINKKI)

Be especially careful in intersections, and make sure that others have noticed you.

On carriageways, and in cycleway intersections

Give way when you turn by bicycle, car, or any other vehicle:

When you leave traffic circle on a carriageway, give way:

Back to top (LINKKI) 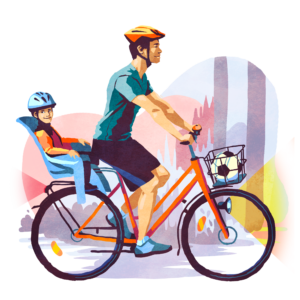 Transporting persons on a bicycle

Fixed penalty, and maximum dimensions of a bicycle

Maximum permitted dimensions of a bicycle

Back to top (Linkki)

Illustrations of the page: Emma Kantanen.

Illustrations can be freely used in articles about the Traffic Code.

Printable versions of the pictures you find here, and pictures for online publications here.